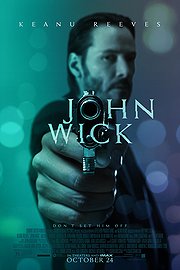 Going into this film I thought it was going to be something original. However, nothing I saw really made me say “wow”. I know critics and audiences love it, but I can’t see why. I can see if they liked it, but LOVE? It’s nothing we haven’t seen before–especially if you’ve seen Taken, or recently The Equalizer. And after seeing those other 2 movies, John Wick feels really boring and lifeless. Much of the time we are left just watching Mr. Wick (Keanu Reeves) fly about the screen taking out villain after villain in a very ordinary (albeit well-choreographed) fashion. Our minds wander and we are getting anxious for the plot to thicken even though it never does. And although we actually do care about the title character, he goes to extremes that make you question if his motives justify his bloodthirsty tirade. While there’s no aspect of the film that makes me hate it, it proves to be quite mediocre and nothing more.

With this coming out so soon after The Equalizer, one can’t help but make comparisons. The script wasn’t as good in John Wick, but it’s also a tighter and less porous story. In this film we stop remembering why we care half way through it. It’s an interesting premise to begin with, but then it falls into convention.

If I can say anything good about John Wick, I will say that its style is pleasing. It’s campy and surrealistic–almost like a comic book or a graphic novel. Similarly to Taken, it’s not weighed down by an overly complicated premise. It doesn’t quite feel like John Wick got the redemption that he was seeking in the end of the movie when he finally catches and kills Iosef, leaving us feeling like this may all have been a waste of time. But then you question whether or not all of this killing that he goes through for his car and his dog is really worth all of this trouble in the first place. Did he even get his car back?

I’m glad to see Reeves can still hold his own in a blockbuster film, but I just wished that I had liked it a little more. Despite my own criticisms, it isn’t a bad movie–it just isn’t a great one.

If you’re interested in purchasing John Wick, click on this link. It helps me fund this site!