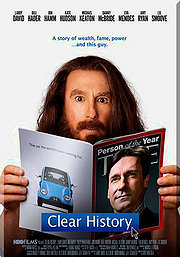 Larry David proves once again that his humor is still relevant and that he can still retain our attention on screen regardless of his age. After his character, Nathan Fromm, gets into a tiff with his boss and sells back his 10% share of a soon-to-be multibillion dollar company, he moves to Martha’s Vineyard to start a new life under a new name, Rolly DaVore, to escape the nationwide humiliation that this ordeal turned out to be. We fast forward 10 years. No one knows of his past and a once cynical nihilist can now be loved and enamored as well as we all hope to be.

Regardless of its irreverent and politically incorrect nature, Clear History carries quite a lot of depth.

In life many of us have to chose between being smart and being lovable. While most of Nathan’s life he has chosen the former, he now realizes that being loved feels pretty good. He’s made great friends and relationships that he doesn’t want to lose. He started over fresh.

Then, all of a sudden, his former boss, Will (Jon Hamm), moves into town. Rolly/Nathan starts reverting to his old ways again and old attitudes start coming out. Even some of his biggest admirers begin realizing that he’s really just a dick. However, we feel for Rolly. We realize that sometimes it’s hard to stay sane when everyone around you is so mindlessly blissful.

But is it really worth it to be truly pliable just so you can be a billionaire? If all it takes is a little smiling and nodding and just going along with everyone else who has rose colored glasses in order to be rich, would you? You’d have to chose between your own sanity and riches. Nathan chose sanity.

It speaks as an ode to the arrogant. This movie makes you feel for them, while demonstrating what happens if you continue down that road.

Honestly, I think the only thing I would have liked more about this movie is if it had Will give the money to Rolly regardless. I mean, it’s not terribly unfathomable that he would want to blow up his former boss’ house. I mean, many people kill themselves in the situation he went through. Will can just build a new house, while Rolly watched his whole life disappear. We want that redeeming value. After all, we like Rolly. Perhaps that’s the point though. Or perhaps it just serves the film’s irreverence.

Either way, it’s about as intriguing and unique of a story that you’ll find. It’s even better than much of the stuff you’ll see in theaters. And it’s sprinkled with the perfect amount of goofy to make it feel right at home with you.