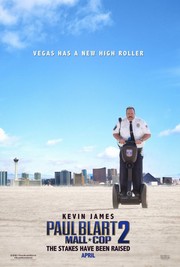 As a whole this film fails at reaching the very low mark of its predecessor in almost every way possible. This Die Hard-inspired comedy “franchise” has now just added a very pointless sequel.

Taking place in Las Vegas, Nevada, Paul Blart: Mall Cop 2 stars Kevin James as Paul–a bumbling mall cop who takes his job way too seriously. Now he’s in Vegas for a security convention where he must stop a heist of the casino.

The entire film takes place within the confines of the Wynn Resort and Casino. There is no galavanting around the strip or hopping from casino to casino–so the should-be glamorous Vegas element is very glamourless.

As flippant as the first film is, this one adds insensitivity to the equation. The movie starts out by picking up where we left Blart last in his life–when he gets married. But we find out that his wife leaves him after 6 days. This is a character we really grow to like in the previous film and love the fact that she seems to adore Paul regardless of his clumsy ways. And then Paul’s mom–whom he lives with–dies by getting run over by a milk truck. This is all supposed to be funny, but instead it’s a jarring beginning for the few fans of the first film.

Overall, it’s much of the same criticisms from the its predecessor, except more. There are maybe 3 solid laughs in the whole movie–but the rest of the jokes fall flat and are yawn-worthy. However, those 3 laughs may be bigger than the biggest laughs from the first film. Although in the first film there were way more of them. In this one, the highlight may be the bird-attack scene–which is played off to its brightest potential and gets the biggest laugh. One of Paul’s cohorts is a security guard named Khan (Shelly Desai) who had most of the other laughs, but was grossly underutilized in this movie.

At least, in the end, there is a redeeming value to all of this. But then again, we could’ve just watched the first film twice.