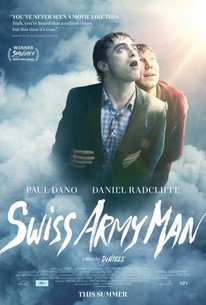 If you watched the trailer for this film, you’re probably aware that it’s going to be pretty weird. Though you never expect it to be this weird.

The uniquely and refreshingly strange tone is established right away. Paul Dano plays Hank, a young man who is stuck on an island about to commit suicide when he sees a dead body (Daniel Radcliffe) washed up on shore. Long story short, he discovers that this corpse has special abilities. It can satiate his thirst, chop wood in half, spit bullets out of its mouth, among other things. Soon, the body starts to talk.

For almost the entirety of the movie we’re trying to figure out if Dano is simply hallucinating or if the corpse really is coming to life. Many details are left for the imagination. But they don’t even really matter.

Much of the film is spent with Dano teaching Radcliffe about the world and how amazing it is. Yet Dano becomes conflicted as this is the same world he was trying to leave. Radcliffe has already left and wants to be back in it. They’re passing each other going in opposite directions.

The filmmakers never have an issue keeping the surreal tone of the movie. The only problem comes in the end where it seems as though, unsure of where to wrap things up, it strays a little and becomes slightly disjointed.

Even if you think you know where the story is going, you never do. That’s what makes it so great. It gives you what you could never ever expect. There are times it gets almost too weird–even for this film–but then again, there’s nothing like it, so what do we really compare it to?

It’s never the weirdness that makes you not like the film. If anything, it could be the fact that it never truly says what it means to–or wants to. But in a universe so loose and free, you sort of have to be able to read between the lines.