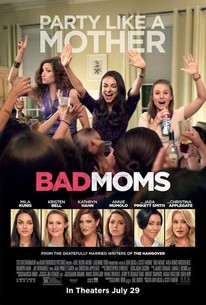 Usually modern comedies have a difficult time building any kind of depth without either feeling forced or sacrificing its sense of humor in the process. Bad Moms, with the help of its strong cast, knows how to work around this.

While it’s not some highbrow character study, it shows all sides of the situation without making it obvious that it’s using a traditional path to get there.

Bad Moms stars Mila Kunis as Amy, a mother of two who gets absolutely no help from her husband, who apparently likes the dog more than his own kids.

Christina Applegate plays Amy’s antagonist, Gwendolyn, who is president of the PTA and doesn’t allow anything with sugar at the school’s bake sale. Amy doesn’t buy into her philosophies, nor her manipulation tactics, which causes Gwendolyn to try and ruin Amy’s life. Applegate does an excellent job of making the audience despise her, while countering Kunis’ charismatic charm.

Amy pairs up with two other mothers who are on the same page as her. They’re played by Kathryn Hahn and Kristen Bell. The former is always under-appreciated in comedic roles, while the latter is totally unrecognizable as a pushover and naive mother.

It’s truly the cast that helps carry this film so well. No character is a wash or unnecessary.

And the jokes are consistent. They run all along the whole film without ever growing tiresome. Each joke is as fresh as the last–and there is a true sense of cohesion amongst it all. No bit seems out of place.

The only thing wrong? The film portrays every husband as useless. Literally. Not one husband in the film is even a little bit competent at being a father or spouse. I guess it bodes well for the film’s target audience, but it may alienate some men out there.

But regardless, I still found the movie highly entertaining and one that I would watch over and over again.