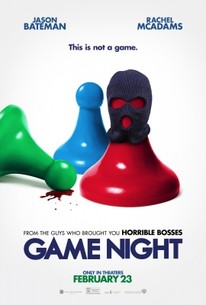 Rachel McAdams is a really good actress, but she’s never been in straight-up comedies. In fact, if you think about it, she hasn’t really been in one since 2004’s Mean Girls–the movie that catalyzed her stardom. So putting her opposite Jason Bateman in Game Night is a smart choice. The two of them have great chemistry. In fact, it’s so good that it nearly overshadows the rest of the film. Luckily, the well-crafted script helps to keep it together.

The comedy often falls apart when they aren’t on screen. And while McAdams does a superb job on her own, it’s Bateman who is the thread holding it together with everyone else. He changes the dynamic of their jokes. Others are funnier when Bateman is in the scene merely because of his presence–the anticipation of how we expect him to react. That tension is what makes him one of the best straight-men in this era of comedy.

Bateman plays Max, who has inferiority issues with his brother, Brooks, played by Kyle Chandler. Everyone loves Brooks and is constantly affirming Max’s insecurities. And from early on, we get a sense that the whole film is going to be one of those spit-on-the-protagonist stories.

But it’s not. Brooks is very obviously not a nice person, yet everyone is still blinded by his apparent coolness. However, Max’s wife, Annie (Rachel McAdams), sees right through Brooks’ nonsense and the film wisely never pins her against her husband.

Every week Max and Annie host a game night at their house. Usually it consists of charades or Pictionary, but this time Brooks puts together an elaborate murder-mystery game for them to play. However, they don’t realize that they’ve embarked on a real-life mission to solve an actual kidnapping.

It’s not that the other actors in the film aren’t funny, it’s that they’re just given too many one-liners, making them one-dimensional. One of the characters, Ryan (Billy Magnussen), is the stereotypical dumb guy. In the movie he’s funny, but tragically overused. Almost as though they had too many jokes for him and just couldn’t decide which ones they liked best. Many of them fall flat. Not because they aren’t funny, but because the audience doesn’t know they’re funny.

But on the plus side, the characters’ jokes always fit the characters, and there was obviously some sort of archetypal distinction between each one.

Game Night has some nice deep moments. The sentimentality isn’t forced or cliched or obviously pointed to. It’s well-written.

And I would be remiss not to mention the always-great Jesse Plemons as Max and Annie’s creepy neighbor, Gary, who always tries to invite himself to their game nights. He’s featured in the film a perfect amount and it’s always a treat when he’s included in the scene.