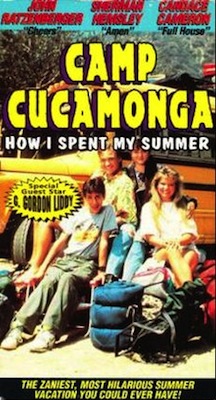 If you’re a fan of late-’80s to ’90s shameless nostalgia, look no further than Camp Cucamonga. Literally everybody who was attached to any TV show from that era is in this movie. At least it sure feels like it.

There aren’t enough summer camp movies about the actual campers, themselves. Maybe due to the lack of enough good kid actors. But this one fixes that issue by collecting already-proven talent. Even when certain performances are marginal at times, the charisma of these kids makes up for it.

This made-for-TV film revolves around campers at a sleep away summer camp. Just like high school, there’s a social class system here, too. At the top are the popular kids, Frankie (Chad Allen), Amber (Candace Cameron), and Dennis (Jaleel White). Then lower down there’s the dweeb, Max (Josh Saviano), and the angsty rebel, Lindsey (Danica McKellar)–whose emotional journey is one of the main focuses.

The movie isn’t without the maudlin realities that comes with teenage drama, and Lindsey is probably the most melodramatic metalhead ever (with help from the most on-the-nose musical score ever). Dealing with a rough home life, the last thing she wants to do is go to summer camp to be surrounded by even more people who won’t understand her. Lindsey’s storyline provides the only remnants of sappiness throughout the film, yet it’s a necessary plot point that pays off during an emotionally palpable moment later on.

The camp’s director is Marv Schector (John Ratzenberger)–who encourages everyone to call him Colonel, even though he’s not–a unintentionally goofy guy with endless manufactured truisms which he spouts over the intercom daily. Colonel isn’t the typical camp director who’s always at odds with his campers because he doesn’t understand them. No, you can see he really loves and gets these kids.

A camp inspector is expected to come out to look over the site in order to re-approve Camp Cucamonga’s accreditation. The only problem is the camp is falling apart. Their repairman has been fired for his negligence, so Colonel has to hire a new one last minute to get camp in order so they don’t lose their accreditation. Knowing most of the repairs won’t be done in time, Colonel plans on buttering up the inspector with lavish treatment and distractions while the new repairman fixes everything.

Sounds like a rock solid idea, except when the repairman (Sherman Hemsley) comes, Colonel thinks he’s the camp inspector. Instead of making him fix everything, he gives him said lavish treatment. Then when the actual inspector (G. Gordon Liddy in his acting debut) pays a visit, Marv thinks he’s the new handyman and begins barking orders at him. Despite this misunderstanding, the film avoids certain plot holes that usually come with the mistaken identity trope.

A Comedy of Errors ensues for awhile, which is actually really, really funny. But eventually this debacle leads to the camp actually losing its accreditation. Distraught over the possibility of camp being no-more, the kids come up with an idea to save it by making a rap video and sending it to the Camping Society of America. This Young MC knock-off sequence is further evidence that Camp Cucamonga might be the most 1990 thing in existence.

Also worth a mention is another storyline featuring camp counselors played by Brian Robbins and Jennifer Aniston in her first credited film role.

What this movie does best is not focusing too much on just one through plot. Instead, it explores the many interwoven stories that do happen at summer camp. The comedy holds up and the nostalgia factor is at an all time high. Camp Cucamonga is obviously a little dated, but it’s much better that way.

Ranking Every ‘Salute Your Shorts’ Episode Ever!