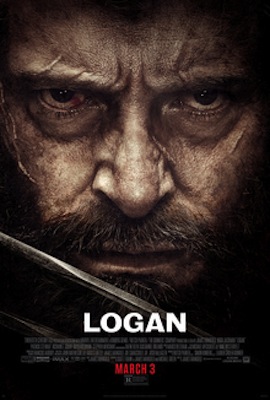 When you hear that Logan is the final Wolverine film, a few concerns immediately come to mind. The biggest of which is, “It better be amazing!” But you don’t have to fret because this movie never disappoints.

Logan is that dark X-Men film Marvel has been trying to make for years now. Each of the previous attempts is dark, sure, but feel too comic-booky to properly execute what the studio is going for. That’s where this one separates itself from every other Marvel film. Not only is Logan dark, but it’s real. Hauntingly real. It feels so real, in fact, that you don’t have a hard time connecting yourself to the premise.

This film takes place in the year 2029, after an apparent mutant genocide of some sort. Both Professor X (Patrick Stewart) and Wolverine (Hugh Jackman) have survived and are in hiding, when all of a sudden a woman shows up and requests that Wolverine takes her adolescent daughter, Laura, to some mutant safe-haven. Thinking that no mutant has been born in the last 25 years, he doesn’t know what to make of this. Up until now, he’s been trying to escape his past and live a somewhat normal life as a limo driver.

Logan is about mutants, but contains a deceptively deep and inventive story taking place in a realistic world, even outside the mutant-based parameters. Like we’re no longer in a comic book.

But that, alone, isn’t what makes us feel the most attached to our two main characters, Xavier and Logan. It’s each of their performances. Both sincere and gritty, we see them as actual people more so than we ever have before. We’re taken out of the confines of Professor X’s school for mutants and the perpetual war of Us versus Them. They’re people, like us, which apparently we’ve seemed to have forgotten about over the years. But that may also be due to the tone of those previous films.

It’s not just the story that’s intriguing here, but how the story is told. Nothing is too blatant and we actually enjoy ourselves as we try and piece together the puzzle. It doesn’t feel like a chore.

Almost everything about Logan separates it from every other comic book endeavor. From the way it’s shot, to the character depth, to the acting. All backed by a modestly fantastic score by Marco Beltrami to boot.

As a side note that needs to be mentioned, the little girl who plays Laura is Dafne Keen, and she is absolutely brilliant. She gives us the kind of genuine spunk and feistiness that we’ve never really seen before from a child actor. It’s not just her demeanor on the action side of things, but her dramatic chops are incredible as well. Frankly, I can’t think of another child actor, ever, who could have been capable of this kind of diverse performance. She was truly amazing.