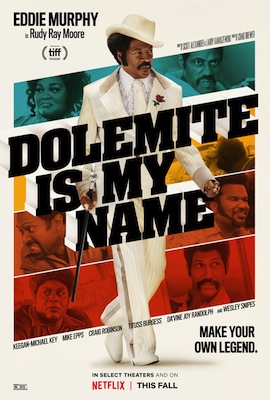 Never heard of Dolemite? You’re not alone. But there is a large group of Americans–beginning with disadvantaged black communities in the 1970s–who grew up listening to comedian Rudy Ray Moore’s stage persona. As depicted in the biopic Dolemite Is My Name, Moore borrowed from the rhyming routines, similar to the Dozens, of local homeless men that were similar to the Dozens, concocting a comedy act that was a huge underground hit (his content and album covers were too risqué for mainstream labels and record shops) and established somewhat of a counterculture, leading many to dub him as the “Godfather of Rap”.

His raunchy rhymes often described sexual exploits in explicit detail and told stories of pimps and prostitutes. Not everybody connected with Moore’s unique style of comedy. But those who did bonded loyally with it. Both antiquated and fresh, Moore blended African traditions of toasting with the soon-to-be hip-hop movement that was just about in its infancy, but ready to explode onto the scene.

In Dolemite Is My Name, Eddie Murphy plays Moore, an enthusiastic dreamer who is well into his 40’s and yet to make a name for himself in the entertainment industry. Years ago he moved from Arkansas to Los Angeles and has tried everything from music to stand-up, but his vaudeville-level material doesn’t seem to resonate with anybody. One day while working at his job in a record shop, Moore hears a homeless man (Ron Cephas Jones) delivering a rhyming story about some mythical guy named Dolemite. Moore thinks this routine would be a hit if the delivery were polished up by an actual comedian. He does just that, dressing himself up in a pimp suit, donning a cane and afro wig, and proceeds to call himself Dolemite.

Moore is the definition of an underground hit. He records his first comedy album in front of his friends at home and sells it on the street out of the trunk of his car. He has the immediate appeal of his local urban crowd, but the best part is there are communities just like his all over the country. Once he gains that exposure, he’s an overnight success.

But now, as most comedians do, Moore wants the real big time. He wants to make a Dolemite movie. He notices that the movies being released are about what the people think they want to see, not what they actually want to see. He knows he’s got a rabid fan base who would want to see Dolemite on the big screen. Paying largely out of his own pocket, Moore hires his friends and pulls some major strings to get this ultra low-budget film made. He gets C-list actor D’Urville Martin (Wesley Snipes), an extra in Roman Polanski’s Rosemary’s Baby, to co-star and direct the movie after spotting him at a strip joint. D’Urville acquiescently joins the project and basically complains the entire time.

However, Moore’s biggest obstacle to breaking in Hollywood is, of course, Hollywood itself. It turns out that movies are a completely different ballgame than the record industry. In 1975, there pretty much had to be a mainstream audience for your project, and the lack of film festivals made it near impossible to get your independent picture into theaters to actually make money. And Moore desperately needed money.

Dolemite Is My Name suffers from the same inherent pacing issues that plague most biopics, due to the naturally uneven trajectory of real life, but director Craig Brewer handles it the best he can. He keeps a strict perspective on Murphy and gives us the information we want, rather than the ones we need–which is a good thing. He doesn’t get too obsessively tied down to the technical details of Moore’s life. Instead, he tries to let it flow as naturally as possible.

Brewer doesn’t really develop any characters outside of Moore, except for Moore’s protege, Lady Reed (Da’Vine Joy Randolph), an overweight woman who never dreamed she’d have a standup career, let alone a supporting role in a popular motion picture. Randolph gives the best performance in the film as the nuanced single mother trying to make ends meet. The heartwarming relationship between Reed and Moore is a friendship in the truest sense. It’s obvious they love one another, but in the most platonic way possible. Moore sees the absolute best in her, and vice-versa, never expecting anything in return.

Objectively one of the highlights of this film is the long-awaited  return of Murphy in a more unleashed role. It’s been 20 years since his last R-rated performance, and finally he’s able to let loose again. Though, unfortunately, he’s not necessarily doing his usual act. This time, he’s portraying a real life person, which is great because that real life person is from a time of political incorrectness, so Murphy doesn’t have to restrict himself. But this also hinders his performance a lot since Moore was never even close to as hilarious as Murphy was–in his prime or even now.

So while it’s great to see him in so raw (pardon the pun), he’s not nearly as funny here as he is in some of his more “recent” roles (It’s an unpopular opinion, but I’m personally a fan of Meet Dave).

Murphy doesn’t necessarily have the same inflection or deep voice as Moore, but still absorbs the role well. He plays a caricature of the comedian and his alter ego, so we’re often unsure if it’s supposed to be a representation or a parody. And in those latter moments, the real Eddie Murphy seeps out. The silly, brilliant comedic genius who forever changed the landscape of what it means to be hilarious. Moore changed things, too, but in a different, and arguably much smaller, way.

It’s that very dichotomy that makes Dolemite Is My Name so bizarrely unique, much like its subject. Working in its favor, the film’s best aspect is how it delivers its message. It speaks to all those who have a dream–often many dreams (or too many dreams)–and hope for just one moment, even if it’s not necessarily masterful, that we can feel like we did something important. Moore drives the ultra-fine line between insecurity and believing in yourself whole-heartedly, especially when the odds feel stacked against you. It’s something every creative person juggles. In the heat of creativity, there’s that unbridled passion and unstoppable force that keeps you blissfully enthusiastic.

Unfortunately, most art is also a business, and eventually that bliss dissipates and we have to stop and wonder if what we made is actually great, or only great in our heads. Unfortunately, we live in a world where our vision is only validated by someone else’s pocketbook. But if you’re passionate enough, that passion will be contagious, and perhaps you’ll get a taste of that validation in a smaller sense, despite the success of the end result. You may not always set the world on fire, but for a moment you might change it just a little for the better. And if you’re as lucky–and persistent–as Rudy Ray Moore, you may even get noticed for it.

Originally published on October 28, 2019 at https://www.popzara.com/movies/vod-reviews/dolemite-is-my-name-2019/