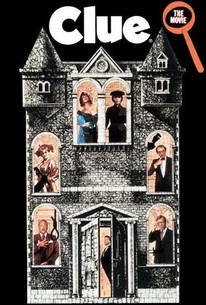 Before it was common to turn toys and board games into movies, John Landis had the idea to make a film based on the game Clue. Paramount must’ve really trusted Landis, because they also let him go ahead with his idea to have multiple endings. Depending on which theater you watched it in, you could have seen any one of the three.

Now in DVD format, the film consolidates the endings into one viewing and presents the first two as “this is what COULD have happened” and the last one as “this is what REALLY happened.” You’d think the multiple endings would create plot holes upon looking back at the events that occur, but they really don’t. Confusion, maybe, but not plot holes.

Either way, this movie is so enjoyable that it’s a good lesson in just going along for the ride, not worrying about innocuous details along the way.

It’s an amazing premise, but Clue isn’t just a gimmick. It’s a remarkably entertaining movie that still holds up more than 30 years later.

Taking place in 1954, six strangers are anonymously invited to a dinner party at a mansion. Unclear what exactly is going on, they are forced, by the butler, to solve a murder.

The humor in Clue is very self-aware. Vaudevillian at times. Much like the movie Airplane!–except it does it without compromising the seriousness of the story or distancing itself from its audience, causing them to become less invested. Sort of like what Mel Brooks achieves in The Producers.

It doesn’t concern itself with committing to being a true comedy, but it also doesn’t just jarringly add jokes intermittently. They’re always appropriate and always smoothly transitioned to. Amongst the ensemble cast, Tim Curry grounds the entire film as the eccentric butler who always seems to be one step ahead.

The dialogue often borders on Tarantino-ian with its snappy banter between characters. Perhaps an inspiration for The Hateful Eight (I’m half joking). The script is carefully calculated and makes all the right decisions with pedantic attention to detail.

It doesn’t force character depth, because it knows it doesn’t have to. This allows the plot to swell nicely, leaving us on the edge of our seats pretty much the entire time.

The runtime is short, and it actually spends almost 30 minutes towards the end recapping the scenarios in order to help everyone figure out whodunit. It executes this in a fun way, though it’s  obviously trying to reach a time limit. But it’s a small price to pay for all the entertainment it provides.