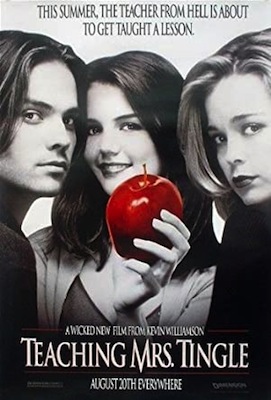 I’m always a sucker for the turn-of-the-millennium alt-pop infused high school fare that Kevin Williamson helped perpetuate in the late ’90s. First as the screenwriter on Scream, then later with Dawson’s Creek, and eventually landing his first and only directorial project called Teaching Mrs. Tingle. This movie often gets lost in the shuffle when discussing that very specific era in teen movies, but perhaps there’s a reason. Somehow Williamson’s usual brand doesn’t translate when he’s at the helm. This time he finds himself crossing his two aforementioned hits, but never knowing which side he wants to lean towards.

We follow the typical overachiever, Leigh Ann Watson (Katie Holmes), as she strives to win valedictorian in her senior class in order to get a scholarship to Harvard and finally leave her small town–a goal her single mother once had, but circumstances led her to not go to school and becoming a waitress instead. Leigh Ann can only afford college on a scholarship, which she won’t get unless she’s 1st in her class. She’s currently 2nd. The only thing standing in her way is her history class, which she should be aceing, except her evil teacher, Mrs. Tingle (Helen Mirren) hates her and keeps deliberately giving her bad grades for no reason other than wanting her to fail.

Fellow student Luke Churner (Barry Watson) tries to help Leigh Ann by giving her a copy of Mrs. Tingle’s final exam, but Leigh Ann doesn’t want to take any part in cheating. But Mrs. Tingle overhears their conversation and relishes in the idea of Leigh Ann trying to cheat, threatening to expel her. That night, Leigh Ann, Luke, and their friend Jo Lynn (Marisa Couglan) go to Mrs. Tingle’s house to reason with her. However, the teacher basically says she doesn’t care if Leigh Ann is innocent because she wants to see the school’s smartest student go down in flames for the fun of it.

Luke then picks up a loaded crossbow sitting on a table and aims it towards Mrs. Tingle. After a physical struggle, the crossbow goes off, grazes her head, but she gets knocked unconscious while falling. The three students tie her up in bed and hold her prisoner for the next few days until she agrees to let them off the hook, but little do they know Mrs. Tingle puts up thick walls, never showing any fear, and exploits the holes she sees in the friends’ dynamic until they start turning on each other. And somehow Leigh Ann isn’t mad at Luke for any of this, even though she already detests him from the beginning.

It’s the typical story of someone doing something wrong and then going down the rabbit hole of making things even worse, except here the venture down that rabbit hole is slightly more realistic than usual. Which is a shame because the events are constantly undermined by unrealistically stupid character decisions put in place merely to move ahead the plot when it doesn’t need their help. Jo Lynn is seemingly put in place as a clueless character to nearly unravels the trio’s plans on several occasions. There are some other loose ended plot points that ultimately serve no purpose, even for the sake of character development, which we keep expecting to see since there is ample opportunity for it.

Williamson commits too much to the romance subplot despite much more serious circumstances, which not only makes everything even more unbelievable, but cements for the audience this movie’s limitations.

Mirren’s haunting performance almost gives the film its much needed thrill, but Williamson’s tone never quite makes her effort worth all the trouble. We’re constantly stuck between comedy and suspense and romance, never committing to either side. The movie isn’t all that funny, and only suspenseful for two or three fleeting moments, but Teaching Mrs. Tingle has a certain charm despite itself. An intangible quality that perhaps proves why, despite obvious talent limitations, actors like Holmes once made a name for themselves in this industry. Despite never living up to the potential of the fun premise, this film is worth a watch for anyone wanting to relive that time period, but doesn’t do enough to make it stand out amongst its contemporaries.